On a break from work and still hurting from the arguments, I wandered lost into a used bookshop behind the Grove.  Running my fingers along the brightly coloured spines of each book, I let my finger tips guide me to my next purchase.  They caught on the cover of a beautiful, fat paperback – airport size, you know the ones that feel special when opened – Hold Still: A Memoir in Photographs by Sally Mann.

The books well worn pages fell open to reveal thousands of words wrapped tightly around a series of the most extraordinary black and white photographs of children and the deep southern landscape that I have ever seen and I was instantly hooked.

I cannot recall any other family photographs that look even remotely like these pictures both in terms of the boldness of expression and the captivating quality of innocence and love that perhaps only a mother could know. All right there in rawness and expression on the page in front of me, drawing me in, curious to know more of this exquisite photographer and her story.

I stood in the store temporarily transported to the deep south to another time and another place..  The children, Sally Mann’s children, show incredible self presence and a powerful sense of self – something that has often eluded me – and to see it jump out so powerfully on the page from these children was a powerful and intriguing gift.  There is this boldness of expression of insight and interpretation, captured with such obvious loving tenderness by a mother at once care giver, at once lover and at once silent observer recording childhood events with her camera.

There is this curious, innocent intimacy to the pictures that has brought the photographer into troubled places.  For the pictures, often nude, show the children in all the rawness of childhood events that every parent knows and has witnessed before but has not chosen to capture with the photographic word.  The pictures transport us to a moment in childhood be it a brutal, raw and painful or happy, self captivated self expression.  We see the children happy, sad, playful, poised, sick, cut, bloodied, angry and are brought present and up straight with each picture – a captivating, capricious moment in that life, a memory imprint, raw and alive recorded- no captured into and onto the page. 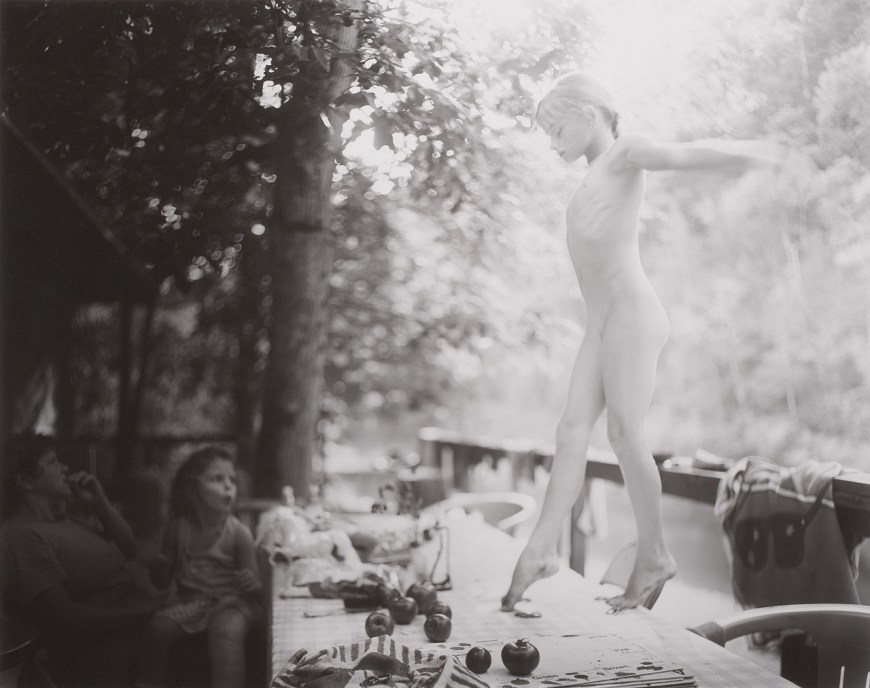 I brought the book of course.  Its bulk a welcome distraction. More than a photographic back catalogue, however, this memoir explores youth and freedom through an intriguing narrative that follows the major influences in this photographer’s life during her formative years.  These include the lives of preceding generations whose nostalgia and love of the land seep through and permeate her own brooding portraits of the Shenandoah Valley.

They also include her father, her mother and her care-giver Gee-Gee who became a surrogate parent and who by her presence and marvellous example gave Mann the opportunity to witness and understand race relations and black exploitation in the Deep South of America.  I particularly love the photograph of Gee-Gee’s feet which capture every month of the above in a singular expression of love.

The book was published in 2015 and was described by the New York Times as “an instant classic among Southern memoirs of the last 50 years”  The book won the Andrew Carnegie Medal for excellence in nonfiction in 2016.  There are two films about Sally Mann – the first, Blood Ties was nominated for an Academy Award and the second What Remains debuted at the Sundance Film Festival in 2006 and was nominated for an Emmy for best documentary.  Have you seen them?

Better still, there is to be an exhibition tour of her work which come to Jeu de Paume Paris June 17 – September 22 2019...it’s already in my diary – are you coming too?